and brings red juice
to the redwoods
singing Hallelujah.

Her blood runs red
but her eyes run turquoise—
sapphires suffer envy
when they look upon them.

Which is what she yearns for.

And she remembers
that she already knows

and brings her way of seeing
to nourish the world. 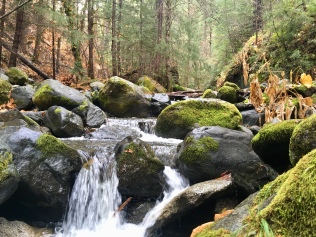 Thank you everybody who followed along during National Novel Writing Month (#NaNoWriMo18), as I wrote & shared snippets of #mywildnatureheartstory (soon-to-be a book ‘Vulnerable Mountain Heart’). It was a wild ride & I had a blast! It also really kicked me into gear getting my mountains of content organized. I think hanging out with rivers and creeks a lot helps everything flow better.

Vulnerable Mountain Heart is not a novel, but a mythopoetic story of my life and lessons, in particular over the last two years, as I transitioned from a non-aligned & unhealthy relationship, job, home, etc. to living an aligned life outside in the forest of the Nearby Faraway leaning into my powers and purpose, by way of soul descent & initiation during my summer vision quest, with plenty of adventure, stories of sacred wounds, self-abandonment, love affairs, and delicious poetry woven throughout!

I didn’t reach the 50,000 word count goal, (reached about half that), but more importantly I DID reach the goal of becoming clear about style, structure, and direction of it. I don’t know exactly what the final book will look like (these things have a life of their own), but I’m confident it will be beautiful, funny, and uplifting.

Through the next several months I’ll be jamming on it, getting it into shape. It’s one of my three winter writing projects, along with a new poetry collection called HEADWATERS & HEARTROCKS (aiming for release date of February 2019) and a semi-autobiographical mytho-poetic fantasy trilogy (for kids and adults) called THE RAINBOW 🌈 HOME CHRONICLES.

My non-writing projects include developing a Wild Nature Heart course curriculum, fleshing out the details of my 1-on-1 Nature-Based Soul Growth Coaching/Mentoring offering, and an Apprenticeship to Soulstice & Silence. More on these later. 😀🙏🦊💓🐢🐻🌈🦅🐛

November is National Novel Writing Month. And while I write a lot, especially poetry, every November I let go by without seizing the opportunity to push my story forward. And I am sitting on mountains of stories.

Until my friend and business partner Katie challenged me and herself to tell our wild nature heart stories. And not only that, but to make it public and share on our Wild Nature Heart channels glimpses of our process and progress. We asked each other: do you dare to show up on the page with the truth of your own story?

And so, in the spirit of council circle, and for the love of the juicy particularities of individual stories and the universal mythos they are held in, I am stepping forward in the challenge. And while I often tell my soul stories through poetry, writing a long-arc narrative is a very different enterprise and I am excited to do it!

So here’s what’s happening: We each (@ryanreturntotheearth & @katie.baptist.1) signed up for @nanowrimo, with the aim to complete rough drafts of the memoirs we’ve been meaning to write for a long time. In many ways these are the back stories for the work we do at Wild Nature Heart, and why we care about it so much.

Throughout November I will be posting updates here on Rumi and the Shadow and my social media channels, and we will do our best to each post on our Instagram and Facebook feeds our word counts, plus a juicy phrase or two capturing our latest writing session. You won’t see the stories in their entirety until they’re ready, but we will be offering  little glimpses as a way to include you in our process, so you know more about who we are, and we hope that by December 1st you will be begging to read more!

Looking forward to sharing this journey into vulnerability & self-discovery with you!
Thank you!

I had my first house meeting with my new roommates. The purpose was to get to know each other and discuss respective chores.

Absent: Owl, possum, raccoon. (being nocturnal, they have a tough time with morning meetings). I hope they’ll read the minutes.

Turns out moon was there the whole time, but I didn’t see her-she had her new moon coat on.

This is by far the largest home I’ve lived in and by far the most housemates I’ve ever had. In fact, so many that I haven’t yet met them all, but I hope to in the coming months.

Opened with an ice breaker: What’s your favorite thing about fall? And what’s the
silliest thing you’ve done this year?
Decision by consensus: We will each be ourselves and allow the other to be themselves. 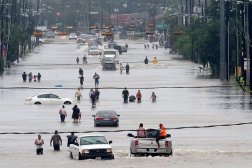 they forgot to ask:

What color is your skin?
What party do you belong to?
What religion are you?
Que lengua habla usted?
Who do you love?

if the eyes are windows to the soul,
will the eye of the storm
be a moment of calm
through which they can imagine
being closer,
something truer
like a nation of cooperation?

which they are they? 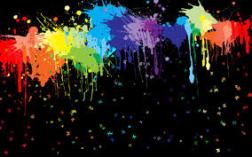 Because it’s National Serpent Day, it seems like an appropriate time to share some things that have been going on for me over the last few months. I want to share because it is the major process in my life right now and because lots of other people are going through ‘non-normative’ experiences and perceive things differently. It can feel isolating to think you’re the only one.

I’ve been going through what I am calling energy awakenings or movements over the last few months. In lieu of another framework to understand it, I have taken it to be kundalini awakening. It is an Indian yogic concept, but the underlying idea is found in various cultures, and is often symbolized/imaged as a coiled serpent at the base of the spine that rises through the body towards the skull. I don’t pretend to be able to capture my experience in words, but I’ll try to give a glimpse.

Some of you already know that I see purple, especially when with certain people. They are flashes of bright light that seem to emerge when I have a certain energy and/or have a certain vibe (love? care?) with another person. And this can be with eyes open or closed, day or night. I had that experience previously with 2-3 people in years past. Then two summers ago it was magnified, and even the person I was with began to also see purple (and still does). It progressed significantly, until it just became a regular part of my everyday life, unless I was depressed and disconnected. Now I see a variety of colors, the current default being bright pink/fuschia and bright light green and blue. Not all the time, but often. And frequently associated with where energy is focused in my body. So for example, when my heart is full and open, I see a lot of pink and green overlapping each other.

Finally, I now increasingly see a full rainbow: bright and amazing and in a variety of patterns and images and in ways that are not really reducible to two or three dimensions. Not gonna lie, it’s pretty spectacular! Once, when a person was caressing me, it was like they were painting me with a rainbow paintbrush. Another time, I saw a xylophone-type instrument with bright rainbow keys. And other times, I see it as the energy centers in the body all at once.

But the colors are the least of it. Or I should say, they are merely a visual concomitant of other events that are occurring.

My ‘symptoms’ began in May, with seeing dancing cords of light in three colors emanating from my heart, and more troubling experiences that at the time I thought were mere anxiety, like spontaneously sweating and shooting sensations in my legs. Then purple was resurrected after a hiatus of more than half a year. It picked up earnest in November when I had three nights of riding giant tidal waves of energy from within that I could barely manage. It was positive, but overwhelmingly powerful and accompanied by a deep bass vibration among others things. I actually shouted out loud because I couldn’t contain and was unprepared for it.

It feels like I am undergoing a transformation, an interior operation on my body and psyche. Or like a purification, a remaking, an infusion. But it’s not linear and it’s unpredictable. I’m learning a lot but often haven’t been able to keep pace. The ‘symptoms’ seem to be more frequent and I can feel it working almost all the time now.

I have sometimes been anxious about what is happening or what is next on the menu. It’s like simultaneously I’m experiencing emotional triggering events that seem regressive and also deeply intuitive experiences that are evolutionary and new perceptions and energy extremes as well as energy balancing.

Once I stopped resisting, things became smoother. That’s the key: Trust the process.

“If you are irritated by every rub, how will your mirror be polished?” -Rumi

Among my ‘symptoms’: vibrating, tingling, shooting pains, itching from within, sounds, buzzing, a voice, colors and patterns and alternate perceptions, pressures, the taste of sweet nectar in the center of my spine, chest pains, specific kind of headaches, inner thuds and clicks, muscle soreness, muscle spasms, fluctuation in sexual desires and eating, sensitivity to sound/energy (more so than usual), cold head/hot head, a change of my desire for alcohol (can’t really drink it now), gas, sweating, and rocking. I’ve had a couple experiences of feeling a merging of energies with other people, experiencing their terror and joy intensely from the inside.

I read this on a site that talked about signs and symptoms:

“Until you adjust and integrate the new higher vibrational energies, you may feel as if in a pressure cooker – nervous, weighted down, shaken up and stressed out. The purpose of these higher energies is to accelerate your healing by bringing up old karmic patterns, negative behaviors, and faulty belief systems (etc.) up to the surface to be looked at and released. It is an intense process, but it works.”

For the most part I am not stressed out about it, nor weighted down, except for nights or days when it is overwhelming and I feel isolated because they are not ‘normal’ experiences. Then sometimes I start to think something is wrong with me and I fear losing my faculties or something.

I don’t know what it all is or means  or even if Kundalini is the ‘right’ framework. I’d be especially interested in hearing from folks who have any similar type of experiences.

But my intuition says it is positive. I am now treating it as a sacred gift and trusting the process, even when there is physical or mental discomfort. I have been able to let go of things easier, including beliefs and perceived harms, and feel much more open and trusting and compassionate and affectionate and creative. So despite the wild movements and unpredictable phenomenon, in the end I feel more grounded.

I’m practicing ways to really listen deeply and see each thing. Then to be in congruence with the energy and make any necessary adjustments. Seem the best way to go.

Maybe that’s a metaphor for how to approach everything in life.

Rumi and the Shadow
Blog at WordPress.com.